Mould Inspections are critical to providing a healthy & safe home for you & your family.

Moulds can be found where the right climate exists, as ling as moisture and oxygen is present. Mould can virtually on any organic surface, such as timber, glass, paper & cardboard, food, clothing, carpet and insulation.

All moulds have the potential to cause health effects, which can trigger allergic reactions or even asthma attacks. That is why it is critical, not only to have a mould inspection to find the mould growth, but to, locate the source of the mould growth.

It is important as I had mentioned above, mould required two elements to exists, Water & Oxygen, take either one way and the mould will be reduced.

It is almost impossible to eliminate all mould and mould spore within our homes.

What Mould Inspection Equipment do we use? 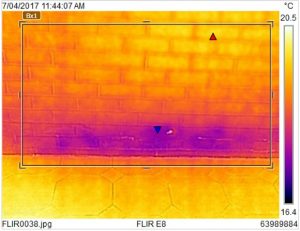 Our primary tool for our Mould inspections, is our Thermal Imaging Camera. The use of these cameras makes it clear to to finding heat differences in building material that we can not see with the naked eye. We are not only looking for heat source, like missing insulation, but more importantly cold, normally indicating a presence of moisture or water, which cooling the surrounding area.

This image shows an internal brick wall that has rising damp, which showed no visible signs of mould growth, only our Thermal Imaging Camera can find.

The we use a smart Thermal Detector, which is also a non contact device to identify hidden thermal bridges and finds potential mould risk areas. This is the only tool that measures the surface temperature, room temperatures and humidity, and immediately interprets the measured results with a warning light.